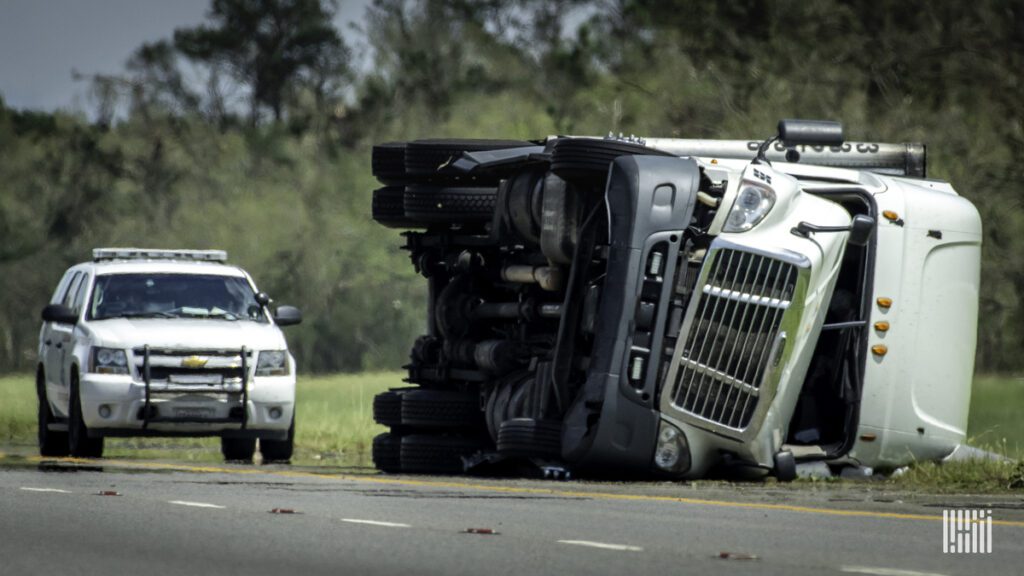 Semi-trucks and sailboats have a few things in common. The gleaming aluminum and steel trailers that dot the highways parallel ships at sea with large, white sails; both chart their courses, head for open routes and find themselves at the mercy of the winds.

Although large and monumentally heavy, tractor-trailers, too, struggle with buoyancy in high winds. It can be both a friend and foe on open waters, but wind is virtually always a threat to those navigating overland routes, especially when the only direction you want your vehicle to move is forward.

Brian Runnels, Reliance Partners’ director of safety, explains just how unpredictable winds can be on the open road. While rain, snow and ice are visible obstacles, he warns of the invisible threat that wind gusts pose — a force that can move your truck into another lane, or worse, tip it over.

Nick Austin, FreightWaves’ director of weather analytics and senior meteorologist, has reported several severe wind events across the United States this past week.

In parts of New York and New England, for instance, gusts reached 50-60 mph in some areas. That uprooted trees in Massachusetts and Connecticut, damaging homes and blocking roads.

Winds reached 80 to 90-plus mph in parts of Montana and Wyoming. They were so strong that Union Pacific Railroad alerted customers last Monday of its plans to hold trains between North Platte, Nebraska, and Green River, Wyoming, asserting that it was unsafe to operate in those conditions.

A veteran trucker himself, Runnels ran extensively through the Great Plains and Rocky Mountain regions of the United States. He said that because many parts of Nebraska, Wyoming, Montana and the Dakotas are flat, with few trees, this can be problematic for drivers as trees act as visual indicators for judging wind intensity.

Runnels elaborated on the dynamic power that wind can wield on trucks. Heading directly into the wind, “in irons” as it’s called in sailing, can dramatically slow even a fast-moving, heavily loaded trailer. But the most dangerous gusts are crosswinds, which can gain enough momentum to topple your truckload at a moment’s notice.

Runnels advises drivers to slow down when traversing areas prone to extreme winds, as speed generates lift. Fast-moving, lightly loaded trailers may be less “anchored” to the ground and easier to push around than a full truckload barreling down the highway.

He reminds truckers that they’re basically hauling a “billboard,” and states that the advanced aerodynamics of the cab and the trailer have made trucks even more susceptible to the brute force of gusts. He explains that trailer skirts add even more surface area for the wind to push around, hence the sailboat analogy.

“Drivers must take into consideration how much weight you’re hauling,” Runnels said, describing how susceptible deadheaded or lightly loaded trailers are to rollovers. “How is it loaded? Does the load have a higher center of gravity with more weight up top than toward the bottom? That’s going to have an effect on it.”

When conditions worsen, Runnels said that warnings against light or empty trailers, motor homes, etc. are commonly issued on the overhead highway signs in wind-prone areas on both the East Coast and in Western states, sometimes even shutting down entire stretches of roads. However, he notes that these restrictions aren’t typically enforced, and fines aren’t given until after a wind-related accident occurs.

It’s worth noting that strong winds can persist long after wind advisories have subsided. Runnels urges drivers to remain on alert in the days following these alerts.

“You’re at the mercy of the wind,” Runnels said. “You can’t put yourself in a situation where there’s 80 mile-an-hour gusts with an empty trailer.”