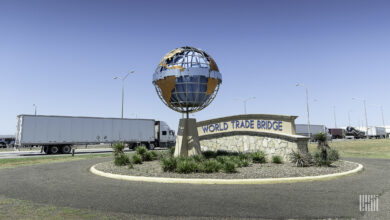 US manufacturers see potential for greater trade with Mexico

There’s much to gain from the nearly $2 billion in trade flows across the U.S.-Mexico border every day. Pacific trade lanes remain stifled by west coast port congestion, the ongoing COVID-19 pandemic and the trade war between the United States and China. These past-year developments have led many American companies with outsourced operations to set up shop much closer to home. Nearshoring manufacturing operations in Mexico are becoming an attractive opportunity for supply chains across North America.

“We are very bullish on this corridor for several reasons. First, the attention that the pandemic has brought to the supply chain, especially at the C-suite with CEOs and COOs, they know they’ve got to have their supply chains closer to home, and Mexico is ideal for that,” said Reliance Partners CFO Tom Albrecht. “Second, it’s because of the people. There are so many carriers passionate about freight, and we know we can help them with their insurance needs.”

Mexico’s advantages over China were a major talking point at the conference, as comparisons were drawn between intellectual property protection, travel convenience for U.S. companies, currency exchange rates, as well as each country’s family structures.

Mexico is currently the United States’ largest goods trading partner, with $614.5 billion exchanged between the countries in 2019. In fact, the presentation noted that 86% of Mexican-made automobiles are exported to the United States and Canada. Reliance Partners expects trade to increase, stating that Mexico’s auto production will rise 54% as a result of COVID-19 supply chain shake-ups.

Mexico was also given the nod for its lower manufacturing costs, longer work weeks, its 13 free trade agreements — the most of any country in the world — higher birth rates, and that its language and numeric system uses the same characters as the United States.

However, cross-border commerce isn’t without risk. Mexico’s effort to crack down on cargo theft has been futile of late, and insurance gaps have amplified each loss. In April alone, FreightWaves reported that 692 cargo trucks were robbed across Mexico. Even more shocking, that’s an improvement — a 21% year-over-year decline.

Reliance Partners’ Borderless Coverage offers automated, cross-border and Mexican cargo insurance to carriers, brokers and shippers with full coverage from the moment of pickup until final delivery without any disruptions of coverage at the border. Coverage can be obtained on a per-load, project or annual basis, with the broadest form and lowest deductibles available.

Despite the challenges of cross-border shipping, logistics providers can operate in these regions with confidence knowing that Reliance Partners provides the most comprehensive form of coverage for both domestic and international freight.

“We’re very excited about the opportunity of partnering with Reliance Partners; we believe they are top notch for liability and cargo insurance in Mexico,” said Bernardo “Bernie” Rodarte, vice president and general manager, Mexico at Schneider National. “We are very confident in the value that we bring moving under a dedicated-type scenario — closed loops with top-notch security — we can’t be surpassed in that aspect.”

In addition to insurance solutions, Reliance Partners is creating comprehensive programs for motor carriers with B-1 commercial truck drivers in their fleet. Mark Vickers, executive vice president of international logistics at Reliance Partners, said that his team is excited to work with cross-border logistics firms employing these drivers, as he believes they bring significant value to U.S.-Mexico trade.

“Historically insurance markets in the United States have shied away from B-1 drivers, but what these markets don’t necessarily understand is that B-1 drivers actually drive safer than [commercial drivers] you’ll find in the U.S.,” Vickers said, reasoning that Mexican drivers earn significantly more than they would at similar jobs in Mexico. “These drivers do a fantastic job.”