Conquering mountains is a downhill battle 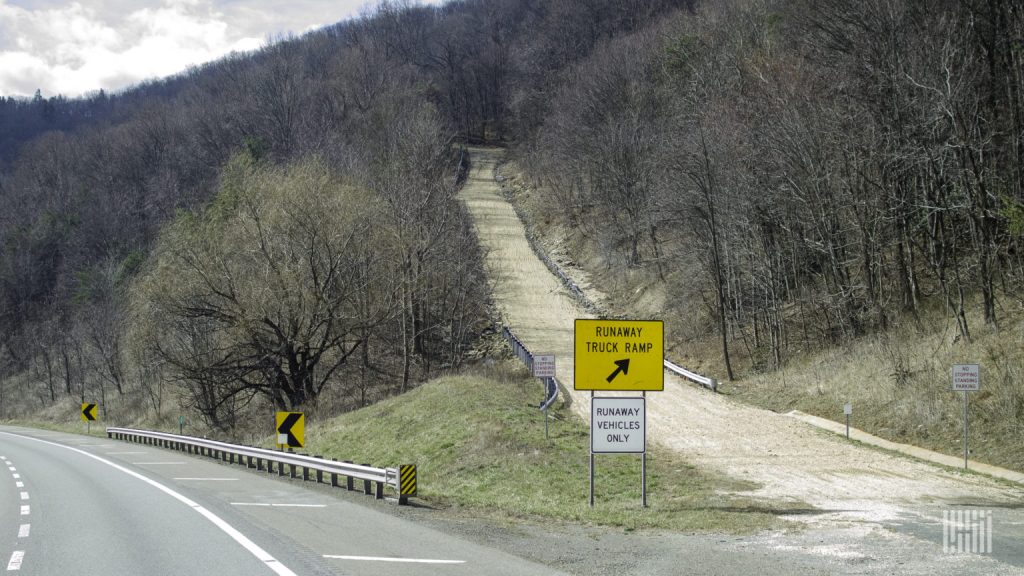 For truckers, conquering mountains and steep terrain is a downhill battle. And yes, things can go downhill very fast when an 80,000-pound loaded truck experiences brake failure, or worse, when a driver makes a serious error.

Drivers who find themselves at the mercy of momentum quite literally receive a crash course in the laws of physics as their speed becomes uncontrollable. Thankfully, some of the country’s most treacherous highways are equipped with escape routes for trucks in momentum mayday.

Runaway truck ramps can be found alongside highways with intensive downhill grades. Their sole purpose is bringing distressed vehicles to a safe stop. These emergency lanes are typically long, uphill stretches of gravel or sand that create additional friction and rely on the gravitational slow-down effect to stop runaway trucks. Some ramps even consist of arresting cables with netting.

But what causes truckers to jet up a ramp? Brian Runnels, director of safety at Reliance Partners, explained that letting the brakes get too hot — riding the brakes down the hill — is the most common factor that forces truckers to ditch. He said that giving the brake too much pressure downhill can render them “squishy” and ineffective. Worse, it can lead to brake fade — loss of braking power — and can even spark a fire, leaving the driver with no method to slow down.

One of the most infamous stretches of highway that employs runaway truck ramps is on Interstate 24 between Nashville and Chattanooga, Tennessee. Monteagle Mountain is well known for its rugged topography, inclement weather and tight curves.

While traffic on its westbound descent comes across many hazards, Monteagle is mostly known for what its eastbound travelers endure. At the top of the mountain, all commercial trucks are required to stop at the truck inspection station before continuing down the eastern slope. Truckers heading east descend the mountain at a 6% grade for about 5 miles, totaling a 1,933-foot drop in elevation. However, two runaway truck ramps, both on the left side of the road, make the unforgiving terrain less treacherous.

Monteagle’s infamy among truckers has spanned decades and proved to be a challenge even for silver screen trucker Bo Darville — “Bandit” — from the movie “Smokey and the Bandit.” As a song from the movie recounts:

Well he started down the grade when he lost the gear

He hit them brakes found he had no air

The Monteagle grade is steep and long

And everybody that seen it thought the Bandit was gone

— “The Legend”, from “Smokey and The Bandit”

Per the song, Bandit miraculously makes it down the mountain unscathed, but this often isn’t the case for other truckers — even for the ones who use the ramps.

Expect your deceleration to be anything but smooth. Trucks may still roll over or jackknife, depending on the severity of the situation.

“Ramps are filled with soft materials but when a truck hits it, it’s going to do some serious damage,” Runnels said. “Granted, it’s better than what the consequences could be if you don’t use the ramps, but they’re known to tear out an axle or the fuel tanks underneath the truck as well as bumpers and side skirts.”

The Tennessee Highway Patrol has recorded 30 runaway ramp incidents on Monteagle since 2003. While use of the ramps is thankfully low, the danger from which they’re designed to protect drivers is ever-present.

In one incident, a driver made his way to the emergency ramp after losing his brakes. His trailer ultimately overturned after striking a rocky ditch line near the top of the ramp. Another incident reports that a trucker lost her brakes trying to gear down after admittedly going a little too fast down the mountain.

A major contributing factor to downhill accidents is speed. Simply slowing down will significantly increase your chances of making it to the bottom in one piece. Runnels urges truckers to carefully read road signage beforehand as it’ll let you know the roadway’s gradient as well as the appropriate speed at which you should travel.

It is recommended that drivers diligently check their brakes during every pre-trip inspection and visit vehicle inspection facilities when available before making each downhill trek.

“States do a good job of warning drivers beforehand whether it’s a mandatory brake check at the top of the hill, speed limits going down the hill, or warning signs before the hill comes up,” Runnels said. “There’s plenty of opportunity for a driver to get geared down, slow down and be at a speed that can take that hill without a problem.”

Runnels said that when in doubt, come down an extra gear before hitting the hill. He added that it’s dangerous for drivers with manual transmissions to gear up to go a bit faster only to realize that they’re unable to put it into gear because they’ve amassed too much speed. To make matters worse, he warns that once out of gear, a driver’s Jake brake (compression release engine brake) no longer works.

“If the truck’s in neutral, it’s just rolling,” Runnels said. “I won’t say it’s impossible, but it’s very, very difficult to get a truck back in gear when gravity has got ahold of it and is pulling it.”