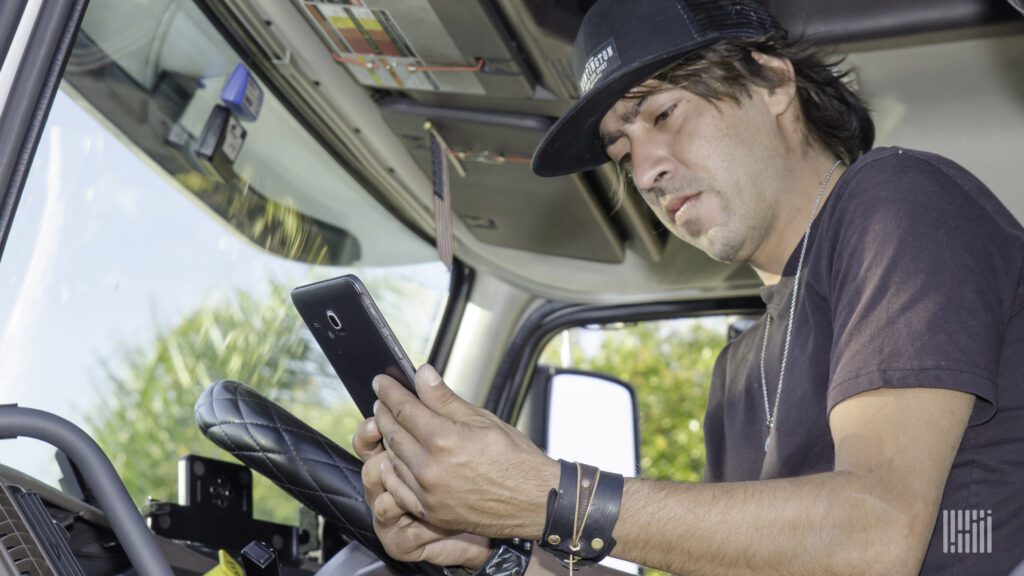 April is Distracted Driving Awareness Month, which means it’s time to have serious discussions with your drivers.

Distracted driving can happen to anyone and at any time — and it happens a lot more than you think. The National Safety Council estimates that eight motorists are killed every day from a distracted driving-related accident.

Just last month, distraction was cited as the cause of a rollover crash of a lumber truck in Prineville, Oregon, after the driver took his eyes off the road to retrieve a dropped item. The driver reportedly veered off the road and then overcorrected, thus losing control of the vehicle. The overturned 2022 Freightliner truck and its spilled contents blocked both lanes of the road. Luckily, no one was injured in this case.

But many aren’t as fortunate. A tractor-trailer driver from Portland, Maine, faces two counts of manslaughter for a January 2021 crash that occurred while the driver allegedly was streaming Netflix in his cab. The driver’s attorney contends he was using Netflix as a substitute for radio, listening to shows rather than watching them.

As cellphones, GPS, radios and even tablets and laptops have infiltrated the cab in recent years, it’s never been harder to avoid distractions. But drivers should remain vigilant considering that distractions have never been costlier.

“There’s been so many articles about ‘nuclear verdicts’ and litigation. If they find out that you were distracted or weren’t working in a professional manner, you can watch the dollar signs start to skyrocket,” Runnels said.

Runnels calls multitasking a farce and assures drivers that accidents can occur no matter how safe they think they are. It is impossible to give two or more tasks 100% of your attention at the same time.

And distracted driving isn’t always the result of a screen, Kaferle explains. Sometimes it’s due to overconfidence. This is especially true for younger drivers who trust themselves more than the machine, putting themselves at risk of an accident.

“We get more confident as we gain experience and that confidence tends to make us more comfortable and willing to take shortcuts,” Kaferle said.

It can be as simple as not following through with your lane change procedure. Instead of using their signals, looking in their mirrors and leaning forward to make sure no one’s in their blind spots, drivers will neglect steps two or three, surmising the odds that someone is there to be low, Kaferle said.

“If the driver’s been trained correctly by the carrier’s safety program that focuses on safety over service, they won’t have to worry as much with younger drivers,” Kaferle said.

Still, newer drivers or those who’ve never dealt with trauma may need to hear the advice over and over — or they’ll learn the hard way.

Runnels learned the perils of distracted driving firsthand, as it led to a 1996 crash that haunts him to this day.

Just as he crossed the Colorado River into Arizona from California, Runnels was caught off guard by a car that pulled out in front of him. Reacting quickly, he slammed on the brakes and swerved into the median, but it was too late. He struck the passenger vehicle and his truck eventually overturned.

Although the driver of the passenger vehicle did pull onto the freeway in front of him, Runnels still blames himself for not paying better attention. After all, he was loading a cassette tape at the time of the accident.

Thankfully, no one in either vehicle was seriously injured, but for Runnels, the emotional scars remain. “I completely changed everything about the way I drove after that accident,” he said. “Don’t live out my mistake. … It’s very hard to live with.”

If only a younger Runnels had known that a fully loaded tractor-trailer weighing 80,000 pounds traveling at 65 miles per hour needs at least 525 feet — nearly the length of two football fields — to completely stop.

But Runnels used the accident as a turning point in his life and has since recorded over 2 million safe driving miles and has made a career out of driver and fleet safety management.

He now values all the space he can get around his vehicle and encourages drivers to do the same. Leaving as much room as possible between your truck and the vehicles in front of you can provide potentially lifesaving additional seconds of reaction time.

“With so much distraction out there on the road, it’s imperative that you drive defensively because you have to be prepared for the people that aren’t paying attention,” Runnels said.

The same goes for responding to aggressive drivers. Both Runnels and Kaferle warn against reacting to motorists who cut you off or provoke you in any way. In today’s highly competitive landscape where time is money, Runnels reminds truckers to not think of themselves in competition with the vehicles around them; don’t tailgate or swerve between lanes to get ahead of traffic.