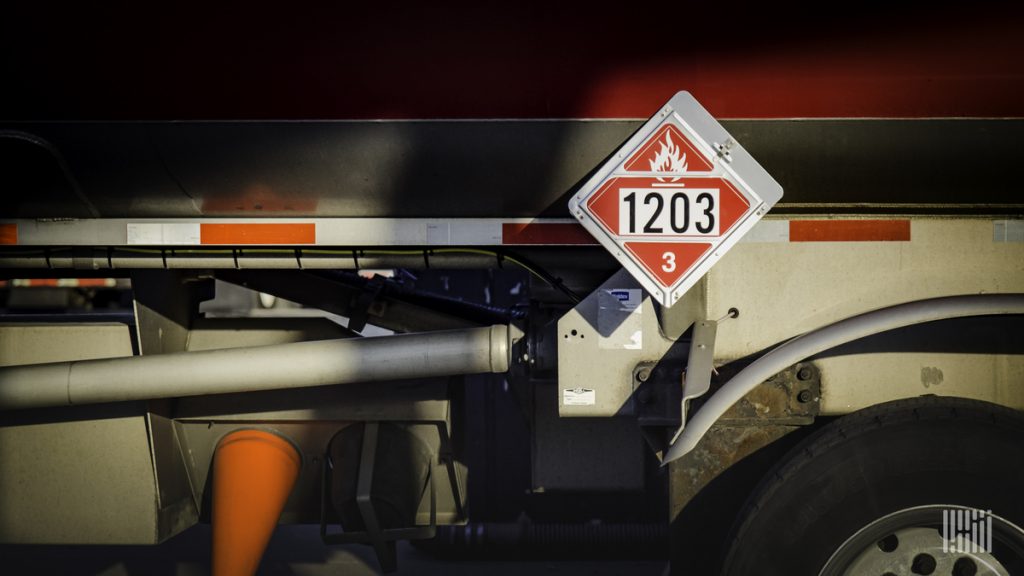 One look at the bill of lading is all you need to understand why fuel hauling can often be a white-knucke experience. Referred to as “rolling bombs” in the past, cargo tank trailers can be deadly if handled improperly. Hauling flammable liquids is no easy task. That is why Mark Barlar, Reliance Partners’ director of risk services, urges hazmat truckers to continue sharpening their safety skills no matter how many years of experience are under their belts.

He detailed one accident in which a trucker hauling propane was struck by a garbage truck at a highway intersection. Both drivers were injured and the cargo tank rolled over and began leaking liquid propane across the roadway, resulting in an over mile-long shutdown to protect motorists.

But cargo tank disasters aren’t always the result of a dramatic highway accident. In fact, simply a silent, invisible leak can also lead to a deadly conclusion.

In the event that a leak is detected, whether resulting from an accident or not, Barlar reminds drivers not to rush to judgment. He said to assess the situation by gathering information on the tank and its contents as well as reading the hazardous material placards on the trailer itself.

Barlar said, “Is it leaking? Has the cargo tank become compromised? Is it a low-pressure tank or a high-pressure tank? Is it on its side, rolled over or on its wheels? These are all things that you should take into consideration.”

Drivers should first alert emergency services of the situation and then contact the owner of the tank and its liquid contents for instructions on how to handle the leak.

“Responding to a leak usually involves contacting the company that owns the product inside the tank and have them come to the scene to help,” Barlar said. “The owners of the tank normally know how it operates and the different types of hazards that are associated with it. They can help you understand what needs to be done to stop the leak.”

High-pressure gases are carried in cargo tanks like the MC 331. These trailers usually haul gases that are liquified by pressure application only — gases such as propane, liquefied butane gas, chlorine and anhydrous ammonia.

Similarly, cryogenic cargo tanks like the MC 338 are used for substances that cannot be liquefied by pressure alone. These tanks hold cryogenic liquids that hold a temperature of at least minus 130 degrees Fahrenheit. Liquid oxygen, hydrogen, nitrogen and carbon dioxide are transported using these tanks.

Barlar noted that the cryogenic tanks are designed similarly to a Thermos bottle with a vacuum-like environment between the outer and inner layers of the trailer that insulates its extremely cold liquid contents.

What makes the transport of gases such as methane and hydrogen so dangerous is that when exposed to outside elements, it will boil off as a gas, which Barlar said can expand anywhere from 250 to 500 times its original volume.

However, not every leak can be stopped. According to Barlar, sometimes a leaking cargo tank must be left to blow off under proper supervision.

“Once a propane leak starts, it’s very difficult to stop,” Barlar said. “You can’t get close to it or get a fire suppression system to it. Sometimes it’s better to just throw some water on it to keep the tank cool.”

The Federal Register’s Electronic Code of Federal Regulations (eCFR) provides an extensive list of protocols for mitigating the risk of igniting a cargo tank — leaking or secured, full or empty.

In emergency situations, 49 CFR Part 392 at 392.25 instructs drivers not to use any flame-producing emergency signals for protecting any commercial motor vehicle transporting explosives or compressed gas as a motor fuel. Instead, it is recommended that reflective triangles, red electric lanterns or red emergency reflectors be used.

However, 392.22 (b (part 6)) states that in the event of a flammable material or combustible material leak, no warning signal producing a flame shall be lighted or placed except at such a distance from any such liquid or gas as will assure the prevention of a fire or explosion.

Carriers are advised to notify the National Response Center (NRC) of hazardous materials incidents occurring at any point in transit, including loading, unloading and temporary storage, at the earliest practical moment but no later than 12 hours after the occurrence.

The best way to stop a leak, however, is by taking proactive safety measures seriously. Most leaks can be detected and prevented through routine maintenance. Make it a habit to meticulously check for leaks and spills during every pre-trip inspection. This includes making sure that each valve is closed and caps are covered as well as checking that safety equipment is properly secured. Drivers should also review the driver vehicle inspection report (DVIR) submitted by the last driver to see if any defects are noted. If so, they should be addressed and fixed as soon as possible.

Section 180.416 of the eCFR recommends cargo tank operators to visually conduct postdelivery hose checks after each unloading. In addition, drivers are advised to engage in a series of monthly inspections and tests of the hose assemblies, piping systems, emergency discharge control devices, stop valves, etc.

However, Barlar attributes a significant amount of fuel hauler accidents not to equipment failure but to speeding and following vehicles too closely. Because of the flammable nature of the payload, the consequences of a tanker trailer accident can be especially deadly. He warns that erratic driving can cause liquids to slosh, causing partial load shifts within the trailer’s compartments, which can result in rollovers.

For this reason, Barlar reminds cargo tank truck drivers to be exceptionally cautious when pressing the gas pedal. He recommends commercial motor vehicle (CMV) drivers leave at least 500 feet between them and the vehicle in front of them.

“People don’t understand just how much speed comes into play during a crash event. If you double your speed, it’s like you’re carrying four times the amount of energy,” Barlar said. “[Truck drivers] say that it’s not the CMV drivers that are the issue — it’s the automobiles that are the issue. They say that people come up so fast and fly around them when going too slow. Go ahead and let them do that. The lower amount of energy that your vehicle is carrying at slower speeds makes it worth going slow.”