Home » Resources » Spring cleaning: Time to tidy up your truck

Spring cleaning: Time to tidy up your truck 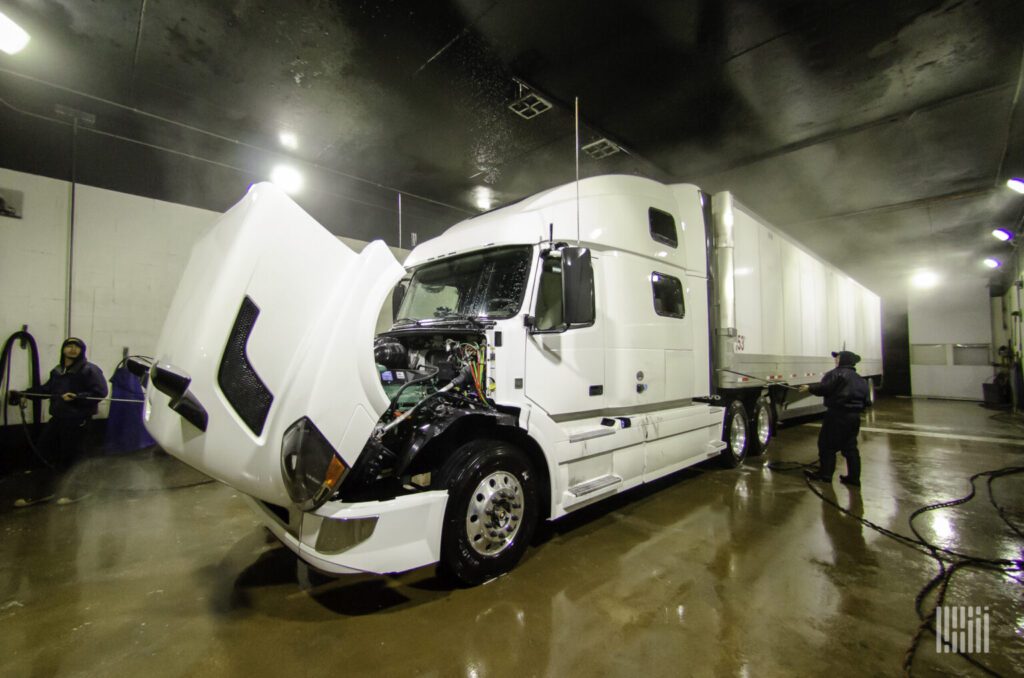 Remember that slips, trips and falls aren’t just outside dangers

Let’s face it, your truck probably needs a deep clean.

Perhaps it was one of your New Year’s resolutions, but after a long and relentless winter, a truck caked in grimy layers of salt and dirt may not be the only mess on your hands. A victim of cabin fever, you’ve come to the realization that your cab needs some tidying, too.

Spring has sprung, which means it’s about time to shed the hefty winter jacket, gloves and boots. In this season of transition, take the time to adopt some simple spring cleaning habits for your home on wheels.

Reliance Partners Director of Safety Brian Runnels steps through a few tips — and benefits — for keeping your truck in tiptop shape.

Runnels described himself as being “extremely clean” throughout his over-the-road tenure, saying anybody who knew him during his driving years was aware of his cleaning habits. “I lived in the truck for three to four weeks at a time. It had to be clean.”

Cleanliness often reflects pride in oneself and one’s vehicle. While most drivers take special care of maintaining their truck, some do not, which spurs some motor carriers to instill these values through their rulebooks.

Runnels spoke of his time at Gordon Trucking Inc., where he served as a regional risk manager and driver safety trainer. The truckload carrier would take pictures of the trucks’ interiors everytime they came in for service and discipline drivers who weren’t taking care of their vehicles.

Some fleets are rumored to take cleanliness even more seriously. For instance, Runnels spoke of a wives’ tale about an owner of an unnamed trucking company who paid for his fleet’s truck washes and considered returning a filthy truck to the terminal grounds for termination.

Of course not every company is so strict; Runnels acknowledged that some fleets couldn’t care less about the state of the vehicle as long as the driver is safe and profits keep rolling in. But generally, Runnels finds that motor carriers respond favorably to drivers who take care of their trucks, especially if they’re company property.

In addition to a mini vacuum cleaner, Runnels mentioned the effectiveness of an air seat blow gun, a little coiled hose used to blow away crumbs, dirt and other debris, especially in tight spaces.

He also urges drivers to buy a mild degreaser to remove oil and grease from the steering wheel down to the floorboards. “All drivers know that it doesn’t take much grease to make a mess inside your truck.”

Spacious sleeper cabs are stocked full of cabinets, side compartments, cubbies and drawers, rendering clutter inexcusable. But cramped day cabs, too, can remain mess-free with a bit of ingenuity.

“I’ve seen a lot of drivers in day cab trucks use small milk crates or some sort of container that sits on the floorboard in front of the passenger seat holding all of their cleaning supplies,” Runnels said.

He recommends taking advantage of wash reimbursement if that’s your company’s policy. Even if your carrier doesn’t offer such reimbursement, Runnels affirms that drivers should get a wash every now and then, even if it’s pricey.

Switching gears, maintaining the inside of the cab is 100% the responsibility of the driver.

“As far as the inside goes, that’s all on you,” Runnels said. “Take some time each week to clean out the cab, and stay on top of it, just like you would your house. It’s a healthier atmosphere to be in if it’s clean.”

Runnels suggests setting aside 10-15 minutes every time you stop to pick up any messes, whether it be at a truck stop or a shipping facility.

Remember that repetition, no matter how insignificant cleaning something small may seem, will save you a great deal of time from cleaning big messes down the road.

Second, clean cabs can mitigate injuries and perhaps accidents altogether. How? Runnels warns drivers to be mindful of loose objects around their seat. For example, how would you respond if a water bottle rolled out of your lap and jammed itself under the accelerator?

Similarly, in the event of a collision or rollover, he explained that loose debris inside the cab can act as projectiles, causing even more harm to the occupant.

However, dangers remain even when the truck is sitting idle. Runnels reminds drivers not to think of slips, trips and falls as just outside dangers. There are many ways drivers can injure themselves within the confines of the cab. Just think about the times you’ve been injured in your own home.

It should also be noted that spick-and-span trucks are less likely to be stopped for inspections.

“Law enforcement is going to have a less critical eye for drivers and equipment that is clean than a truck that looks like it hasn’t been washed in two years,” Runnels said. “They’re not looking for clean inspections; they’re looking for violations. If something as simple as trying to keep the truck clean is neglected, they’re going to wonder what else is being neglected on that truck?”