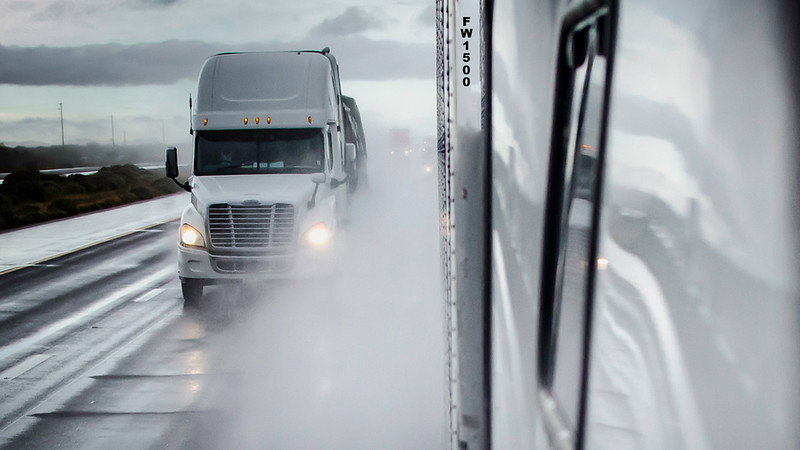 In the days leading up to Hurricane Laura’s landfall, Louisianans and Texans along the Gulf Coast made their way North to escape the storm’s wrath. Despite evacuations, fleets of commercial truckers came the opposite direction to deal with Laura’s aftermath.

Hurricanes and tropical storms present big business for freight. The destruction wrought by a powerful storm spurs major retailers as well as state and Federal agencies, such as the Federal Emergency Management Agency (FEMA) to rapid response.

Devastated communities need drinking water, non-perishable foods, construction materials, generators, temporary shelters, and much more. Getting emergency supplies to these areas quickly rests on the shoulders of truck drivers up for the challenge.

FEMA contracts can be lucrative as the agency covers a lot of spot market loads and pays a premium typically higher than the market rate. However, market tightness may dampen response efforts, according to FreightWaves market analyst Zach Strickland.

“FEMA is used to having pricing power as it has government backing. But when the market is tight like it is now, it loses its competitive advantage as large suppliers such as Walmart, Target, and The Home Depot are already paying premium rates,” said Strickland. “FEMA might not look like a favorable option when carriers are already struggling to service their regular shippers.”

According to Truckstop.com analytics, the average national rates for dry van and reefer truckloads continue rising from a slump in May, reaching the highest levels since 2018. Carriers value their relationships with shippers and may be reluctant to divert capacity away from their regular routes, Stickland said.

“There’s a bit of altruism involved in the relief efforts. But truckers need to make money,” he said. “When they’re able to make 20-30% margins elsewhere, they have to take it.”

Still, truckers are answering the call to the Gulf Coast region. One such respondent is KCH Transportation, which scrambled trucks to Louisiana before the storm’s impact was known. The Chattanooga, Tennessee-based truckload carrier and brokerage have aided FEMA in hauling hurricane relief loads for a number of years.

“We were staging trucks a week in advance of Laura making landfall. But it grew so fast that we were staging trucks the night it was hitting,” said Hunter Landreth, KCH’s director of transportation. “We coordinated loads from California, Tennessee, Georgia as well as the Northeast consisting of drop trailers and shuttle drivers.”

Clean up efforts typically take several months to complete. After a hurricane, FEMA will evaluate the damage and may or may not request more trailers, depending on the severity of the situation. Landreth pointed to KCH’s response to Hurricane Harvey in August and September 2017 as an example. In those instances, FEMA requested that its trucks remain staged for an additional 30 days after assessing the severity of storm damage.

FreightWaves Market Expert Donny Gilbert has seen hurricane destruction firsthand working with trucking relief efforts. He suggests drivers wanting to get involved in hauling emergency loads should know what they’re getting into beforehand.

Gilbert suggests drivers expect delays when arriving at the staging areas. Unloading trailers could take from a couple of hours to many days. When hauling commercial, state or federal hurricane relief loads, he urges drivers to make sure to set parameters around detention and layovers into confirmation reports. FEMA will pay detention, but it’s often up to the driver to prove their delay claims.

Expect payments for brokered loads to be slow as well. In a recent interview, FreightWaves CEO Craig Fuller recommended drivers use a factoring company or quick-pay service to accelerate payment.

Additionally, brokers may forget their promises during the freight frenzy; that’s why it’s crucial to document everything. For billing purposes, Gilbert recommends recording the date, time, and shipper’s signature with each load pick up or drop off. That helps to ensure proper compensation.

Driving through a storm-ravaged area may be an emotional experience for some drivers, Gilbert said.

“We only see what the news shows. But what the drivers see firsthand is much worse.”

Truckers may come across many roadway obstacles such as downed trees and powerlines; Flooding is another risk. Food and shopping options will likely be scarce in communities without power. Gilbert recommends stockpiling three to five days of non-perishable food items, along with batteries and chargers for electronic devices.

Hurricane season is just getting underway. And while a cyclone may not currently be on the radar, the Atlantic could create an absolute monster of a storm at any time. Truckers interested in hauling hurricane relief loads must be ready when the alarm sounds.

“We should appreciate truck drivers for what they do,” Gilbert said. “These emergency operations would not exist without their help.”